June 23, 2020
2 comments
As Black Lives Matter protests continue around the world and here in Central Oregon, local public defenders have their own axe to grind when it comes to criminal justice reform and police brutality. They fight on the front lines in courtroom battles every day to protect the very people these systems tend to harm the most: those who can’t afford a lawyer to defend themselves. 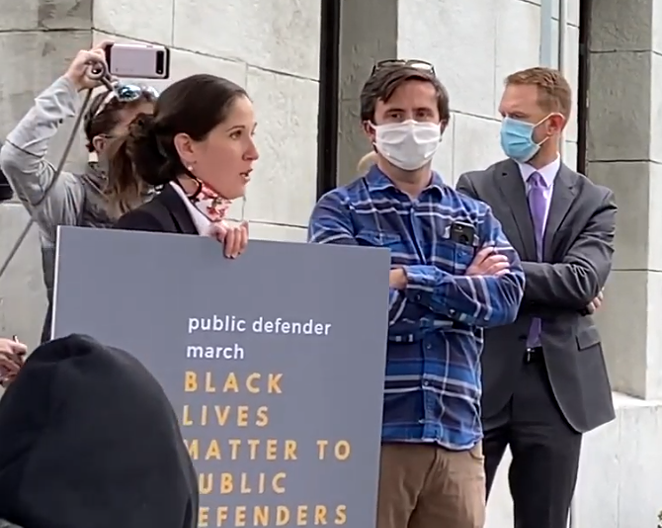 On June 8, public defenders from the county joined a coordinated national protest by storming District Attorney John Hummel’s press conference to support Black Lives Matter. They challenged Hummel on a range of topics from racial discrimination in his office to covering for the cops. While Hummel’s speech on criminal justice got most of the attention from local news outlets that day, the public defenders stole the spotlight when they ceremoniously stormed out after yelling “your words are not enough.”

While their job may not come with the glamour—or even the pay grade—of public prosecutors, public defenders have some of the highest job satisfaction among attorneys, said Joel Wirtz, the co-executive director of the Deschutes Defenders, a public defense nonprofit that takes on two-thirds of the cases requiring state-funded defense council in the county. The group’s offices overlook the Deschutes County Circuit Court in a former turn-of-the-century hotel on Greenwood Avenue in Bend. Its parent company, Crabtree & Rahmsdorff, has been there since 1981.

“I do the Mental Health Court. It feels really good to help these people who need to be in the system; they need to be getting therapy and medication. It should be a medical issue, not a criminal issue,” Wirtz said. “It’s doing a lot of social worker-type stuff. It’s incredible to see people change.”


From the standpoint of both cost effectiveness and making our community safe, people generally don’t see the light and improve and turn around and become great people by virtue of spending many years in prison. -Karla Nash, co-executive director of the Deschutes Defenders tweet this

“I don’t think as a society the right response is to sweep the ‘untidies’ out of the public view,” added Karla Nash, the other co-executive director of the organization. “We ought to be more compassionate. I think there are a lot of reasons that militate in favor of responses in the system that aren’t just ‘lock them up and throw away the key.’ From the standpoint of both cost effectiveness and making our community safe, people generally don’t see the light and improve and turn around and become great people by virtue of spending many years in prison.” 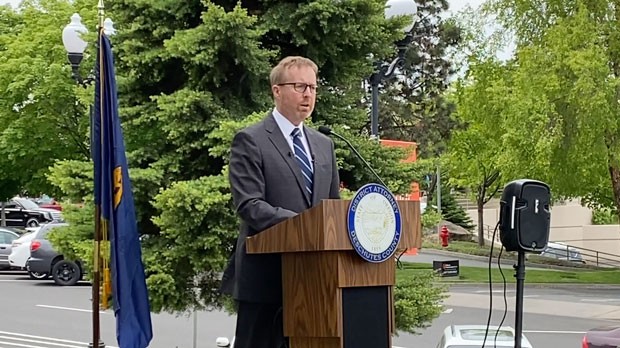 Wirtz said the while the organized protest earlier this month was coming from individual attorneys and not his nonprofit, he believes knowing all he can about how police operate helps the organization represent their clients more effectively in court.

Police body cameras are top priority for local public defenders, he said. While the Redmond Police Department has used them since 2017, it was only after hundreds of people in the area joined Black Lives Matter protests over the last month that the Bend Police Department chose to put a new camera system in their budget. It should roll out in the coming months. Sergeant William Bailey of the Deschutes County Sheriff’s Office said the agency plans to research vendors next year and may eventually phase them in.

“You get context from a video,” Wirtz said. “The police have a perspective; they want to prosecute. In the police report, a lot of things that could lead to my client’s innocence doesn’t show up, because I’m not seeing it right now.”

Beyond body cameras, Wirtz sees plenty of other opportunities to increase police transparency. Law enforcement officers often act as essential witnesses in criminal cases, but public defenders are generally left in the dark about what goes on behind the scenes in police departments.

“It should be a requirement of the prosecution to notify us if there has been any kind of disciplinary action,” he said. “Even if they just lied on their time sheet, that is dishonest, it’s something you could use. ‘Look they can’t even be honest about time.’”

While public defenders have difficulty accessing disciplinary records of law enforcement officers, so does the public at large. It’s an issue that’s gaining national attention right now, because in many cases of police brutality and murder, the perpetrators have a long history of reprimand within their departments. Some hop around to different agencies after being fired over and over.

Derek Chauvin, the Minneapolis police officer accused of murdering George Floyd by kneeling on his neck, had 18 complaints on his official record and two that ended in discipline from his department. In Oregon, police files are protected by state law whether the actions by the officer results in discipline or not. The only time a reporter could request this information is if the incident is in the “public’s interest,” if the officer in question is running for public office for example, according to Ian Leitheiser, assistant attorney for the City of Bend.

Wirtz had a long list of other critiques of the criminal justice system that need overhaul: “We have the highest incarceration rate of anywhere in the world; minorities are incarcerated at a much higher rate; minorities are stopped more frequently than whites in this country, and minority cases are prosecuted at a higher rate,” he said.

He ended with the success story of a client who stole some tools, but ended up returning them and straightening out his life.

“This is a guy, if he gets a job and someone to oversee him and do UAs (urine analysis), this can be a tax payer,” he said.