Researchers conclude one in 1,000 people in Bend had an active case of COVID-19 during study

June 16, 2020
1 comment
Last month, a group of field teams working with Oregon State University fanned out across Bend to test households for COVID-19. They tested 615 people in Bend, and no one tested positive.

The Team-based Rapid Assessment of Community-Level Coronavirus Epidemics, or TRACE study, is led by a group of researchers at OSU who want to determine the prevalence of COVID-19 in certain communities. It began in Corvallis in April, and then moved on to Bend at the end of May. The researchers will go to Newport next weekend where 120 workers at Pacific Seafood (processing plants) have tested positive. 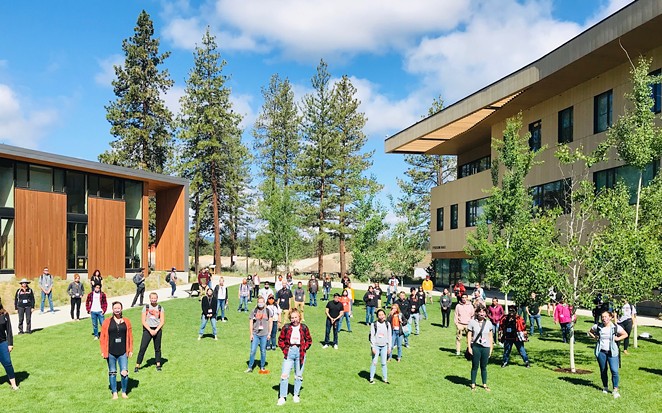 Even though Bend’s test results from the randomized study were zero, researchers concluded that one out of 1,000 people in Bend have contagious cases of COVID-19 based on modeling and prior cases reported by the Oregon Health Authority. This adds up to an estimated 100 cases within Bend’s population of 100,421. As of June 16, Deschutes County Health Services reported 137 positive cases since testing began three months ago, and 122 of these people have recovered.


One in 1,000 is low, but the virus is still in the population and we know it is readily transmitted. —Ben Dalziel, assistant professor, OSU’s College of Science tweet this

“This level of prevalence is consistent with Bend residents being careful about social distancing, wearing masks and staying home prior to Phase One reopening in Deschutes County,” said project leader Ben Dalziel, an assistant professor at OSU’s College of Science. “One in 1,000 is low, but the virus is still in the population and we know it is readily transmitted.”

Another project co-leader, Jeff Bethel, an associate professor at OSU’s College of Public Health and Human Sciences, said that even when the general population has a low prevalence, clusters may emerge quickly in high-risk environments, such as the food processing facilities in Newport and others around the U.S.

The OSU researchers corroborated with another prevalence study in Bend conducted by Biobot Analytics which has been testing waste water samples in certain Bend neighborhoods for COVID-19. Researchers from that study estimated hundreds of cases in Bend during a few non-consecutive weeks in April, but found no traces since April 28.

The field teams didn’t perform antibody tests, which may have demonstrated how many people in the county had coronavirus in the past. St. Charles Health System reported on April 26 that the FDA has only approved a few antibody tests and that many tests sold online or on the underground market are fraudulent. Further, the Centers for Disease Control and Prevention along with the World Health Organization said said that a positive antibody test does not definitively equal immunity.