A new virtual reality arena opens on Bend's east side

Within seconds of entering the game, a zombie takes me out. Not being someone who regularly indulges in video games and having only put on an Oculus virtual reality headset once, I guess I'm red meat for the zombies who now surround me in this virtual reality arena. Fortunately for me, the game master gets on the headset, reminding me that I have a "gun" in my hand and that I can use it to shoot the zombies, now swarming. I get in a good scream, run forward and manage to take out a zombie or two. 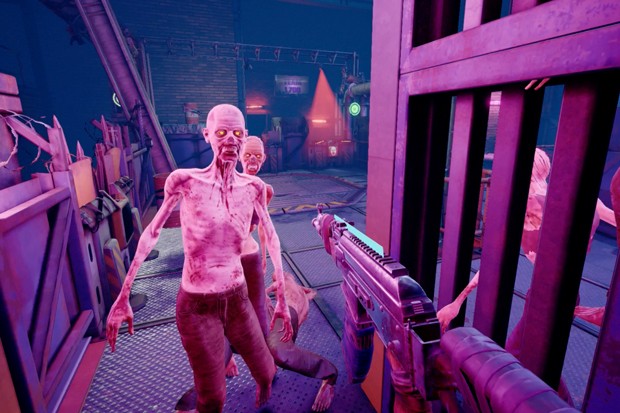 It's my first time at Zero Latency, the virtual reality arena that recently opened on Third Street in Bend. I'm terrible at first, but over the course of the first 15-minute game in the arena, I get better at knowing where the zombies—my height and making creepy noises all the while—are coming from. I mostly manage to take them out before they overcome me, but the game is sometimes so real that my genuine fear has my brain going haywire, paralyzed. When the game ends and I and my teammates—Source Publisher Aaron Switzer and his son, Sean, our distribution manager—take off our headsets, I'm informed that I am what's known as "a screamer." Apparently, the game was real enough that I was erupting in little screams the whole time.

In an arena that's about the size of a tennis court, players can walk around with no wires or cables attached to them, pull the triggers on their VR "guns" and see, hear and feel all the action. tweet this

The younger Switzer, far more of a gamer than I, tells me that this was far cooler than playing with a VR headset—the more DIY and sedentary version of what we are now experiencing in its fullest form. Zero Latency, a company that started in Melbourne, Australia, in 2014 and is quickly opening franchises around the world, offers a fuller experience than that headset, with a "free roam virtual reality experience." Bend's location is one of 15 located in the U.S.

WATCH: The Source sent videographer Darris Hurst to go check out the action at Zero Latency.

In an arena that's about the size of a tennis court, players can walk around with no wires or cables attached to them, pull the triggers on their VR "guns" and see, hear and feel all the action, almost as if it was really happening. But because it's a game, a game master—the most stoked gamers in Bend, who help other people play and get paid for it—is there to direct traffic, to alert you when you're about to run into an actual wall in the arena, and to generally ensure that you have a very good time. I am fairly certain that sweating and screaming my way through the game was a good time—at least, I'm ready to go back and take my gamer nephew with me. Anything to impress the younger generation...

"The best part about these games has got to be the people," said Zero Latency Bend's co-founder Terry Walkey. "They're excited. They come out of there with their minds blown, and that's just such a great feeling."


Zero Latency Bend, opened by Walkey, his wife and another partner, just opened this month, following Gov. Kate Brown's relaxation of rules for counties still in the Extreme Risk category, which allows for up to six patrons inside gyms and indoor recreation facilities. The arena's owners had hoped to open in October, but COVID-19 restrictions prohibited that until now. 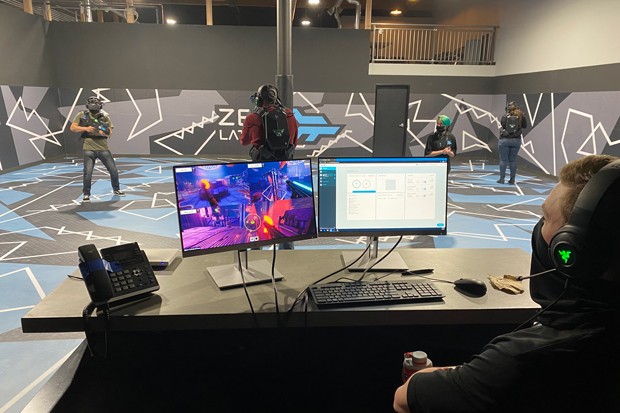 Now, up to six players can play together in each session, taking on zombies in one of two games, including Undead Arena and Zombie Survival. When restrictions relax even more, more games, including Sol Raiders, Outbreak Origins, Engineerium and Singularity (not all zombie and shoot-em-up related)—which allow for less social distancing—will also come online. Under normal circumstances, up to eight people can play together. Another popular game, Far Cry, is also coming soon.

Players register on the Zero Latency site, and right now, ZL is offering a one-time 25% off price through March 3. (Just enter the code FEB25 to get the discount.) On Sundays, a 30-minute session that includes suiting up and game master instruction costs $26, or get 60 minutes for $52. Regular 45-minute sessions cost $45. Outside the arena are areas for gathering, having a beverage or a private party.