Sounding Board to House Our Neighbors, a city-manager-appointed committee, recommended that Bend allow shelters in managed camps in all zoning designations except for heavy industrial.

In a press release on Monday, the committee laid out four shelter types, all currently zone restricted. They include group shelters where there's shared sleeping areas, multi-room shelters with individual sleeping units, outdoor shelters like the proposed managed camp on Ninth Street and hardship shelters, which are RVs or mobile homes permitted for residential properties. 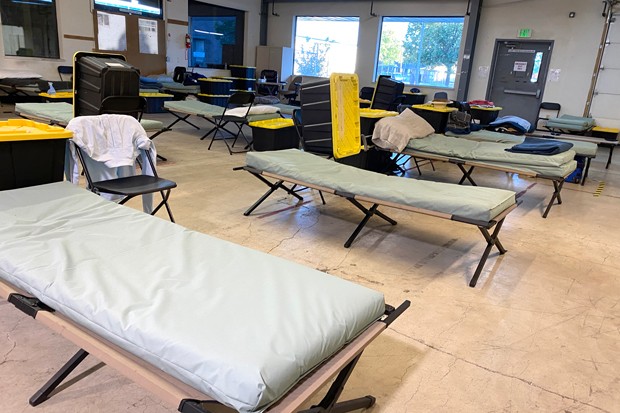 "Right now, for the outdoor shelter type, which is managed-camp or the tiny-home-type village with cabins, you could only have something like that in the commercial zone," said Susanna Julber, senior project and policy manager with the City of Bend, who's working with the committee. "We have different provisions for different shelter types city-wide, but they're pretty restrictive."

Currently all shelters need a conditional use permit, which requires an additional review before approval.

"The code amendment would make things a little bit easier if somebody wanted to build a shelter," Julber said. "The City's probably not going to be building a bunch of shelters because of this—the goal is to provide the legal framework, the regulatory framework, so if a social service provider, or other entity, maybe a private property owner... if they have a piece of land that's zoned mixed use or something, and they wanted to put a shelter there, they could."

The Sounding Board started meeting in April to develop recommendations on the size and type of shelters that should be allowed in a zoning district. It's comprised of social service providers, housing advocates, and designers and representatives from the Bend Economic Advisory Committee, Neighborhood Leadership Alliance, Affordable Housing Advisory Committee, Planning Commission and the Bend City Council. Its recommendations to end the restrictive zoning of shelters everywhere except for industrial areas was primarily done out of safety concerns.

"That's where manufacturing, flammable materials, things like that occur. So we didn't want to have an existing heavy industrial facility have to build new firewalls or whatever they might have to do if a bunch of residents are living next door," Julber said.

The committee also recommends all shelters and camps be: managed, include on-site parking, adhere to the Americans with Disabilities Act, have toilets and trash receptacles, provide good-neighbor agreements for adjacent neighbors and residents and cannot be used for short-term rentals. Recommendations have been made but implementation will require revisions and acceptance by the planning commission. A survey will collect feedback from Bendites until Nov. 1.

"We'd really like the public to go ahead and fill that out and try and educate themselves on what the different shelter types are, and then give us meaningful feedback on those amendments through the survey," Julber said. "Then we'll get the sounding board back together in November, and review all the public feedback, and revise the code amendments as necessary."

The planning commission is expected to review the changes in January. The changes will need to be approved by City Council before it can be adopted.